This news is a bit belated, but I wanted to give a HUGE congratulations to the Metropolitan School District of Warren Township, here in Indianapolis, for winning the NAMM (National Association of Music Merchants) Foundation 2020 Best Communities for Music Education–for the fifth year in a row! This award is only given to a very select group of schools throughout the country, so to be chosen five years in a row is an amazing achievement for this district’s performing arts programs.

Warren Township, on the east side of Indianapolis, serves approximately 11,500 students from elementary through high school. This is not the first time that Warren’s performing arts programs have been nationally recognized, as they have earned Grammy Signature Schools Semi-Finalist recognition 9 times and were honored as a Grammy Signature School in 1999. Music ensembles have 27 appearances at the Indiana State School Music Association (ISSMA) Organizational State Finals since the 1980s.

The cornerstone of the Best Communities for Music Education award centers on support for K-12 music education by administration, faculty, students, and community. Ed Meckes, Director of Bands and Performing Arts Chair at Warren Central High School, says that the district applies every year by showcasing various aspects of their K-12 music offerings and completing a lengthy application process. The key, he said, is “having such a supportive administration, community, and instructional stuff that have contributed to us earning this honor.”

More information on the award, the district, and the performing arts department can be found at https://www.wcperformingarts.com/. Congratulations, Warren Township! 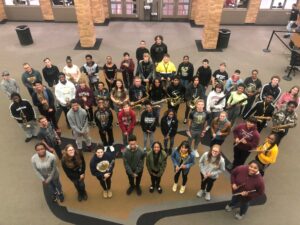