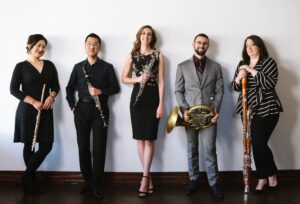 If you’re looking for some wonderful music performed by top-notch musicians to usher in Christmas and close this year out, look no further than Volante Winds. Now in their 5th Season, Volante Winds has reached high acclaim in the field of chamber music for their “beautiful sound”, “perfect ensemble”, and “excellent, mature poise.” All former doctoral candidates of Indiana University Jacobs School of Music, they have continued to collaborate this year with virtual recordings of the highest caliber.

Suyeon Ko is the Instructor of Flute at Western Illinois University. Dr. Ko is also the founder and the Artistic Director of the Indiana University Jacobs School of Music Flute Academy, and is a founding member of Volante Winds. Originally from Jeju, South Korea, Dr. Ko received Doctoral of Music degree in flute performance from the Jacobs School of Music at Indiana University, Performer’s Diploma at Indiana University, Master of Music degree in flute performance from the University of North Texas, and a Bachelor of Music in flute performance from Jeju National University in South Korea. With the Volante Winds, Dr. Ko has toured across the U.S. and East Asia. Formed in 2016, the quintet has been a featured ensemble at premiere chamber music festivals including American Chamber Music Festival, Chamber Music Wilmington, Jeju International Wind Ensemble Festival in South Korea, Juneau Jazz & Classical festival, and Mineral Point Chamber Music Festival. Other significant performances include our tour of the American Midwest in 2019, which included live performances, national public radio broadcasts, as well as masterclasses at Bradley University, University of Northern Iowa, and the University of Iowa. The quintet has been semifinalists at the Fischoff and Plowman Chamber Music Competitions in 2018 and 2017 respectively.

The ensemble has an active Facebook page, where they have been posting their beautiful video collaborations. They also have a YouTube page, where you can find last year’s performance of one of my favorite Christmas songs, the Coventry Carol. It is my sincere hope that this music, and whatever else you are listening to these days, will help carry you through this holiday season with a bit of joy–however it looks this year. From us to you, have a very Merry Christmas!