Episode 2 of our “Paige’s of History Spotlights” is ready to view. Some of the most famous instrument brands were born during this time period, including a flute name you might recognize. Enjoy this video to find out what else was happening in our country and with our company between 1885-1900!

Today on “Paige’s of History,” we’re looking at the years 1885-1900.
This time period saw the development of several notable instrument manufacturers on the heels of the second Industrial Revolution.
Henri Selmer founded his namesake company in 1885 and eventually began producing world famous clarinets and saxophones, and William S. Haynes founded his flute company in Boston in 1888.
Nippon Gakki Co. Ltd, now known as Yamaha Corporation, was founded by Torakasu Yamaha in 1887. Japanese woodwind maker Yanagisawa began importing their instruments for US military bands around this time as well.
Just before New York’s Ellis Island began processing immigrants from other countries in the United States, Peter Ilioych Tchaikovsky conducted the first performance at Carnegie Hall.
At the height of the military band movement, instrument maker J.W. Pepper patented the Sousaphone in 1893, and the world famous “Stars and Stripes Forever” was published in 1896.
During this time period, military and extracurricular bands led the way in popularity, but in 1898, Will Earhart of Richmond, Indiana, founded one of the first school orchestra programs for academic credit. That same year, Frank Holton began producing the first Holton Company instruments. 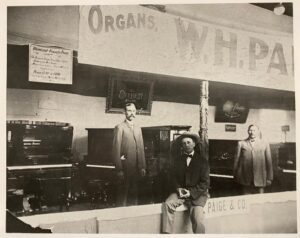 At the Paige’s storefront in Terre Haute, customers shopped for Steinway pianos, Kimball organs, and Indianapolis’ own Leedy Drums, founded in 1898. 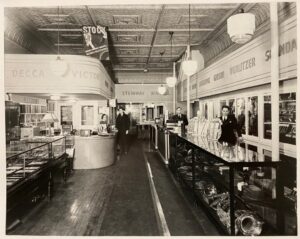 The next decade would see some significant changes in the company. Join us next time as we look to the beginning of the 20th century and what that meant for our company and our country.