I have some BIG news for you – the Indy Flute Shop, along with Eastman Music and Haynes Flutes, is hosting a virtual clinic with jazz flute master and Haynes performing artist, Nestor Torres! Join us Tuesday, September 21, at 7pm on Zoom or Facebook Live for this exciting and dynamic event. This will be an improvisation clinic and participation is encouraged – bring your flute and come ready to play! Registration is required; visit www.wmshaynes.com/register to sign up for your spot. 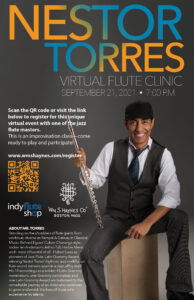 ABOUT MR. TORRES
Standing on the shoulders of flute giants from worlds as diverse as Rampal & Galway in classical music; Richard Egues’ Cuban Charanga style; rocker Ian Anderson’s Jethro Tull; Herbie Mann and – most influential of all – Hubert Laws as pioneers of Jazz Flute, Latin Grammy Award winning Nestor Torres’ rhythmic and mellifluous flute sound remains apart in a class all by itself. His 14 recordings as a soloist; 4 Latin Grammy nominations, one Grammy nomination and one Latin Grammy Award; collaborations with diverse artists such as Gloria Estefan, Kenny Loggins, Dave Matthews, Herbie Hancock, Tito Puente, Michael Camilo, Paquito D’ Rivera and Arturo Sandoval; as well as performances with the Cleveland, Singapore, and New World Symphony Orchestras among many others, are testament to the remarkable journey of an Artist who continues to grow and enrich the lives of those who experience his talents.

Born in Mayaguez, Puerto Rico, Nestor Torres moved to New York City, where he pursued Classical flute studies at Mannes School of Music, Jazz at Berklee College of Music and Classical and Jazz at New England Conservatory of Music in Boston. During that time he also learned to improvise in the ‘Charanga’ Cuban Dance Music style, which helped shape and develop Nestor’s melodic and danceable sound. In addition to his achievements in the studio and on the stage, Torres is also the recipient of many awards, including two honorary doctorate degrees from Barry University and Carlos Albizu University, for his commitment to youth, education, and cultural exchanges.

This event is sponsored by Haynes Flutes and Eastman Music and will include some brief information on their offerings in the Indy Flute Shop. It will be broadcast live on Zoom as well as Facebook Live; registered participants will receive an email with virtual meeting information. Register yourself, your student, or your studios ASAP for a spot for this unique and exciting event!