If you’re in the Indianapolis area–or even if you’re not!–there’s a good chance you’ve come across Indy’s flute GOAT, Karen Moratz. Not only is she an accomplished performer, professor, and entrepreneur; she also has an incredibly diverse background and set of interests! I was lucky enough to study with Karen as I got my Masters degree at Butler University. Please enjoy getting to know a little bit more about her. 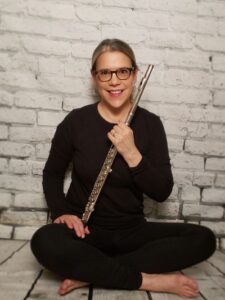 Karen Evans Moratz is Principal Flutist with the Indianapolis Symphony Orchestra and Artist in Residence at Jordan College of the Arts at Butler University. She has been on the faculty at the Grand Teton Festival Orchestral Seminar and the Aria International Summer Academy, as well as Visiting Professor at Indiana University/Bloomington and the University of Illinois/Champaign-Urbana. Her cadenzas for Mozart’s Flute Concerto in G major have been published by Southern Music. She was the Coordinator for the National Flute Association’s Young Artist Competition from 2003-2008. She is a founding member of the Greater Indianapolis Flute Club (Indyflute) and of the Indianapolis Baroque Orchestra. Ms. Moratz holds a bachelor’s degree from the Peabody Conservatory and a postgraduate degree from the Musikhochschule Freiburg im Breisgau. She was a member of the New World Symphony under the direction of Michael Tilson Thomas in 1988-89. She has studied with Britton Johnson, Tim Day, Mark Sparks, and William Bennett, and has recorded for NPR, Koss, London/Decca, Arabesque, and New Albany Records. She is the author of Flute for Dummies (John Wiley & Sons). Ms. Moratz is also an active yoga instructor, with an E-RYT200 certification from the Yoga Alliance.

Karen has appeared on the Creative Baggage podcast, where she chats with host Angela de Burger about how she was drawn to the flute, her love of languages (she speaks four!), and why she connects with yoga and music in such a meaningful way. You can find that episode and other performances of hers here. In addition, you can view an archived virtual evening featuring the Win-D-Fender, of whom she is a sponsoring artist, and recital here.