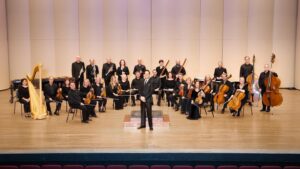 Indianapolis is chock-full of amazing performing groups, and I wanted to take some time to highlight some of them in the coming months. This week, we’re talking about the Indianapolis Chamber Orchestra, a small chamber group based in the Butler University area, with a roster packed with amazing musicians.

Founded in 1984 as the Musicians of the Cloister, the Indianapolis Chamber Orchestra first performed at Trinity Episcopal Church. In 1987, Maestro Kirk Trevor was appointed Music Director and Conductor, a position he held until 2015, when Matthew Kraemer took over. The ICO joined the Indiana State University Contemporary Music Festival as Orchestra-in-Residence in 2007 and remains in that position today. During this three-day immersive educational event, the ICO sponsors a nation-wide competition for the composition of new works for chamber orchestra. In 2012, ICO became the professional Orchestra-in-Residence for Schrott Center for the Arts at Butler University.

Of course, since we’re all about all things flute here, let’s introduce the flutists of the group. Alistair Howlett is Principal Flute, in addition to being Assistant Professor of Music at DePauw and Professor of Music at Anderson University. Howlett has performed as Guest Principal Flute with the Indianapolis Symphony, East Coast and ProMusica Chamber Orchestras, and the Fort Wayne Philharmonic and has performed with the Louisville Symphony and the Lyric Opera of Chicago. Howlett also served as Adjunct Lecturer in Flute at the Jacobs School of Music, Indiana University in 2016. He also teaches privately in the Indianapolis area.
Suzanne Farley has performed as 2nd flute and piccolo with the Indianapolis Chamber Orchestra since its founding. She received B.S. and M.M. Degrees in flute performance from Ball State University where she was a graduate assistant and student of Paul Boyer, and has performed in master classes for noted flute artist-teachers Marcel Moyse, Julius Baker, and Samuel Baron. Suzanne has served on the faculties of Anderson University, Indiana Wesleyan University and Purdue University, and has performed with a number of regional orchestras, including nine seasons as principal flutist with the Anderson Symphony Orchestra. She enjoys a variety of free-lance activities as a studio session player, chamber musician, and substitute flutist for the Indianapolis Symphony Orchestra.